Nickel North is a Canadian based explorer focused on defining a Ni-Cu-PGE resource at our Hawk Ridge Project in Quebec. 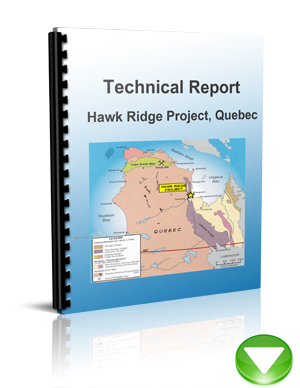 There are 29 mineral occurrences over the 50 km long, 18,000 hectare Hawk Ridge Property. Of these occurrences four have been drilled. These are the Main Zones.

In 1973-74 a total of 6437 tonnes of mineralization were mined from underground and open pits from both veins. In the East Vein the remaining resources was estimated at 7260 tonnes grading an average of 6.9% Cu and 0.3% Ni. In the West Vein the remaining resource was estimated at 9662 tonnes grading an average of 6.6% Cu and 3.2% Ni (Lone Star Mining, 1974). No data was included in Lone Star's report to determine the method used to calculate the resource, and none of the parameters used to calculate the resource were described in the report. This historical resource estimate is on the Hawk Ridge Property but the calculation does not conform to the categories used in NI-43- 101 regulations. There are no more recent resource calculations available on the Pio Lake Zone and since the core is no longer available additional drilling would be required to confirm or update the historical resource calculations. A qualified person has not done sufficient work on to the data to classify this historical estimate of mineral resources, this resource should not be treated as a current mineral resource and should not be relied upon. The historical resource estimate is not being treated as current mineral resources or reserves.

The Gamma and Schindler Zones are located in the central part of the Hawk Ridge property. The two zones are on strike and about 500 m apart.

The area is underlain by a sequence of basalt, porphyritic gabbro and thin intervals of turbidite sedimentary rocks that have been thrust from the east and that dip steeply to the east. Peridotite has been injected at the contact between porphyritic gabbro and basalt, and appears to form a bulge south of the Schindler Zone where it is brecciated (Figure 14).

The massive mineralization consists of pyrrhotite, chalcopyrite and pentlandite associated with the underlying sedimentary units that are occasionally termed iron formation, graphitic schist and turbidite. Composite grades of 4.56% Cu, 1.44% Ni over a near true-thickness of 3.5 m were intersected in HR 96-53 and the disseminated mineralization averages 0.52% Cu and 0.19% Ni over 16.2 m.

The mineralization is open at depth. To the north and south the massive mineralization appears closed but there is additional potential further north, and to the south where the Schindler Zone is located.

The mineralization at the Schindler Zone is as disseminated sulphides along the upper part of the porphyritic gabbro that has been intruded by peridotite directly above. The mineralization appears to be continuous and an average 0.4% Cu and 0.15% Ni was reported over 10.5 m, not true thickness in drill hole HR-97-102. The massive sulphide interval reported on surface was not intersected at depth (Figure 17).

Analyses for PGEs have not been performed on the core from the Gamma or Schindler Zones. Results from 16 surface rock samples taken by Wares and Goutier (1990) in the area reported 110-1230 ppb Pd and values of 120 and 150 ppb Pt were reported from two analyses.

The Hopes Advance Main Zone is located in the northern part of the property immediately north of Lambda Lake. The zone is underlain by a unit of porphyritic gabbro that dips steeply to the east and lies above a unit of grey siliceous metasedimentary unit 3-15 m thick that contains 2-20% pyrrhotite and 0-1% chalcopyrite. Peridotite, gabbro and basalt in thrust contact with the glomeroporphyritic gabbro are present to the east.

A consultant performed a historical resource estimate using the drill hole assay data on the Hopes Advance Main Zone and reported 48.4 million tonnes of proven and probable reserves with an average grade of 0.51% Cu, 0.18% Ni and <0.01% Co to a depth of 500 m (Paul, 1997). The calculation was made using assay data from 14 drill holes from the 1996-1997 drilling campaign and from incomplete data in two holes drilled in 1962 and provided a to a depth of about 500 m. The details of this historical resource estimate were described earlier in this report and present three scenarios for open pit operations and four scenarios for underground mining using key assumptions for commodity prices, exchange rates and costs that are no longer valid (Paul, 1997).

The mineral reserve calculations of the Hopes Advance Main Zone are unreliable and undependable because they were carried out prior to the development of the regulations of NI 43-101 and were performed by someone who is not a qualified person. The economic projections are invalid and of little value because many of the assumptions were not based on factual data and most are no longer valid.

These historical resource estimates of reserves calculated on the Hopes Advance Main Zone by Paul should not be considered current mineral reserves. A more recent resource calculation has not been prepared on the Hopes Advance Main Zone because additional infill drilling and assaying in the zone are required to confirm the extent of the mineralization. Moreover, assay verifications of the core still available are necessary before any further resource calculation can be made by a qualified person in this area. The historical resource estimate is not being treated as current mineral resources or reserves.

In certain drill holes such as HR 96-20 the better mineralization occurs near the metasedimentary unit that has been hornfelsed where a composite grade of 0.51% Cu and 0.17% Ni were reported over about 51.7 m, true width.

Several of the drill holes in this section were not sampled to the bottom of the hole and additional mineralization could be identified in these sections.